BCNH (UK College of Nutrition and Health): my disappointing experiences


During my BCNH diploma in Nutritional Therapy I dropped out, because I felt deceived by BCNH, due to concerns related to: 1) lack of transparency, 2) inadequate teaching methodologies, expertise and resources, 3) academically unrecognised, not validated and unaccredited institution and course certificate, and 4) financial related issues. To sum up, the course in general (including their teaching, attitudes towards students, recognition, etc…) was of no value for the high fees I was paying.


The following are REASONS which: 1) led me to quit the course, and 2) which BCNH will not tell you BEFORE you pay a chunk of money and sign several documents:


1)  Unrecognised and not validated certification

BCNH is an academically unrecognised and an unaccredited institution and, therefore, its transcripts (which are type printed on a low cost A4 paper) are not academically recognised and validated (Contact British bodies for accreditation and recognition: recognised.ukdegrees@bis.gsi.gov.uk & info@the-bac.org). Higher institutions did not recognise my BCNH transcripts. Furthermore, employers are not keen on hiring someone based on an academically ‘unofficial’ transcript. Moreover, all BCNH certificates are not recognised by the British Association for Nutrition ((+44) 20 7291 8378/ accreditation@associationfornutrition). It seems like BCNH uses the University of Greenwich name which, unlike BCNH, is a recognised University, to support their status claims and to sound like an official British/UK academic body.


AFTER spent a hefty sum of non-refundable money they started pushing me to ‘top-up’ my diploma (cost: £15,350 and £1,950) to a B.Sc (cost: £27,025 and £1,950), as 'craftily' they started ‘admitting’ that a B.Sc taught by the Uni of Greenwich and BCNH, where the degree transcript is issued by the Uni of Greenwich, is more recognised. In reality, BCNH’s actual multi £££ diplomas are academically unrecognised and not validated because the transcripts are issued by the academically unrecognised BCNH.

See attached document for evidence (highlighted in red circles): is correspondence with a programme leader at the Uni of Greenwich stating that BCNH diplomas are not validated by the University of Greenwich. 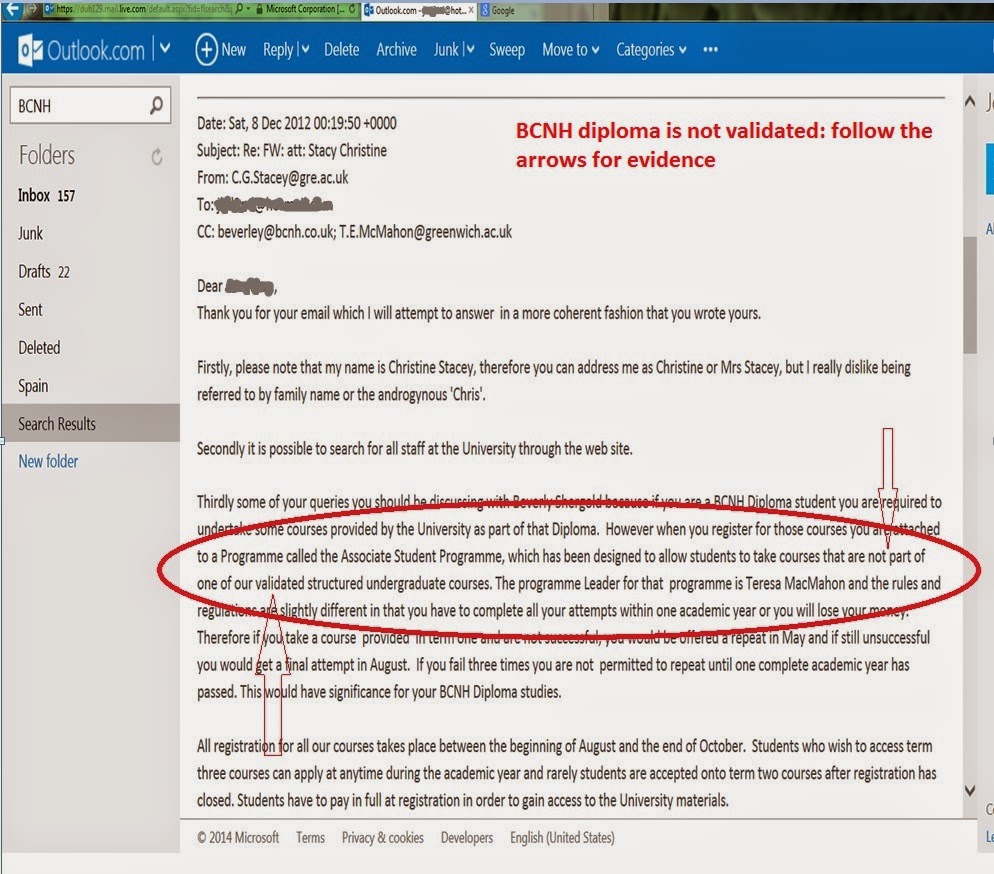 2) As a fully qualified teacher myself I feel that BCNH’s teaching methods, expertise and resources are very poor


a. Most of their speakers who delivered the lectures were not sequential and consistent in their teaching flow, in line with an order of representative and chronological slides, which does confuse students especially distance learners. On top of this, BCNH teaching technology equipment to aid in delivery was limited. Consequently, I could not figure out which slide they were referring to.

b. I could not ask questions to the lecturers. On another hand, module tutors seemed disturbed by my questions and constantly told me to read at home, perhaps they were not able to answer my questions because they were not as qualified as the lecturers. At the beginning of the course they asked us to buy a whole list of expensive books; obviously, book fees are an additional cost apart from the course fee (more than £700 along the course).  Furthermore, BCNH online catalogue library is very small, and some of its articles are old.

c. For my 1st essay I slightly exceeded the word limit and they graded my 1st essay 40% as a penalty.  In here I believe that they wanted to give me a lesson to write fewer words in the future, so that they will correct less work.

d. They wanted me to write my essays in a way as I used to write at secondary school-that is how I felt.

e. Their exams were time consuming involving too much memorizing without reasoning.

a. On their catalogue there was no indication that they charge £10 extra if paid by card (see attached for evidence [highlighted in red circles]: it is correspondence with their administrator highlighting additional costs) 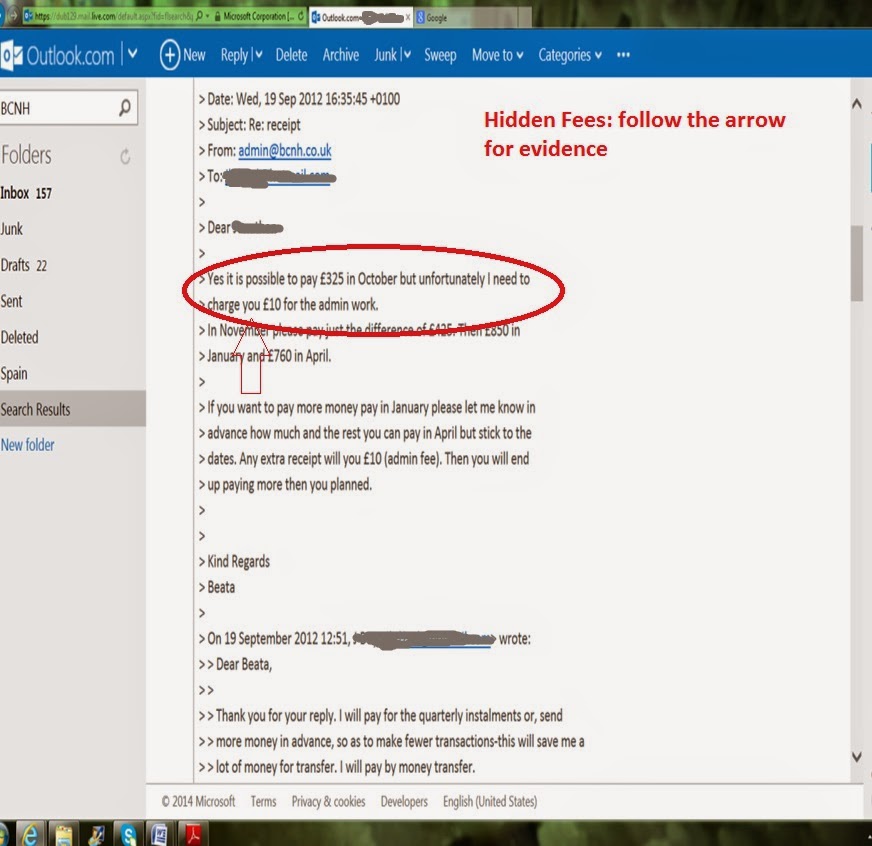 a. AFTER paying a hefty sum of money and signing several documents they stopped being as nice and helpful as before, and at times my emails were not answered.


One of the many examples:
Once I wanted to buy a book from a non-associated BCNH book store (an online book store selling cheaper books than the one linked to and referred by BCNH), and asked the course leader for book verification. As a result, her answer was: ‘’ the reading list is quite clear…we would expect you to figure out the answer for yourself’’. See document 4 as evidence (follow arrows). 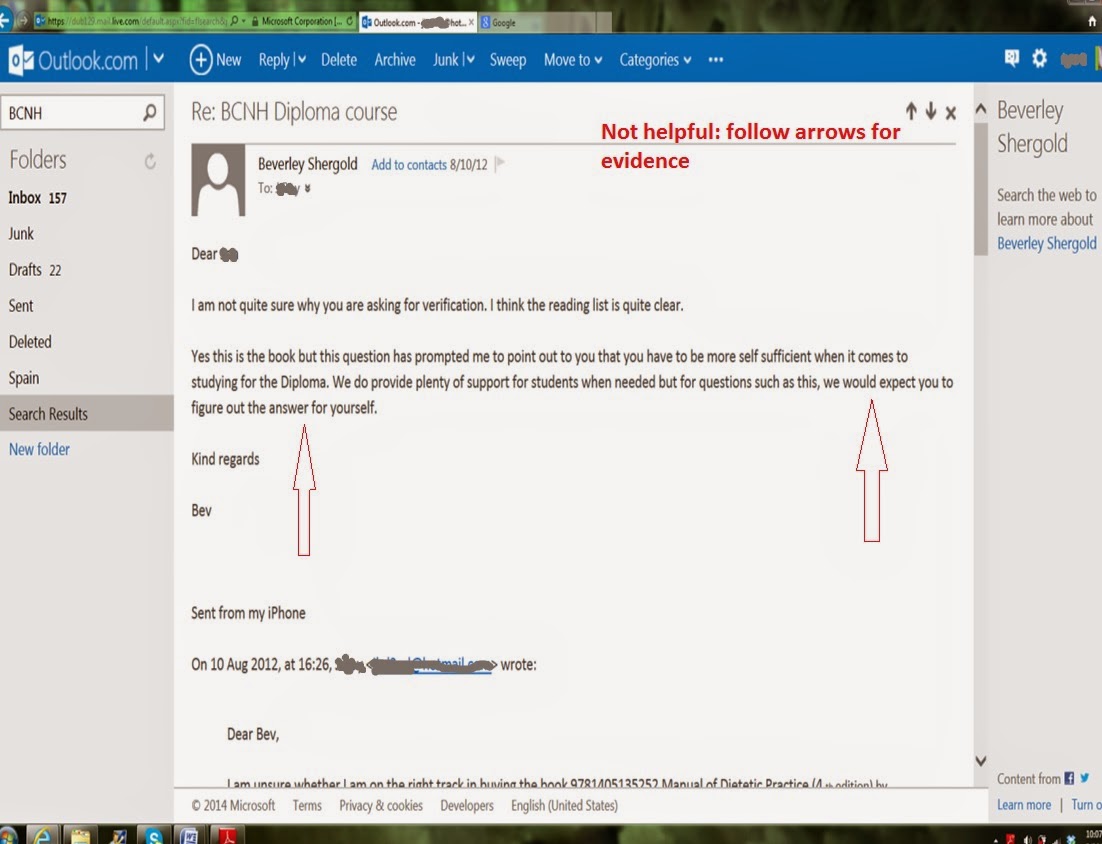 b. When it came to payment they were extremely nice (and perhaps unprofessional)! See attached document as evidence it is correspondence with their admin. 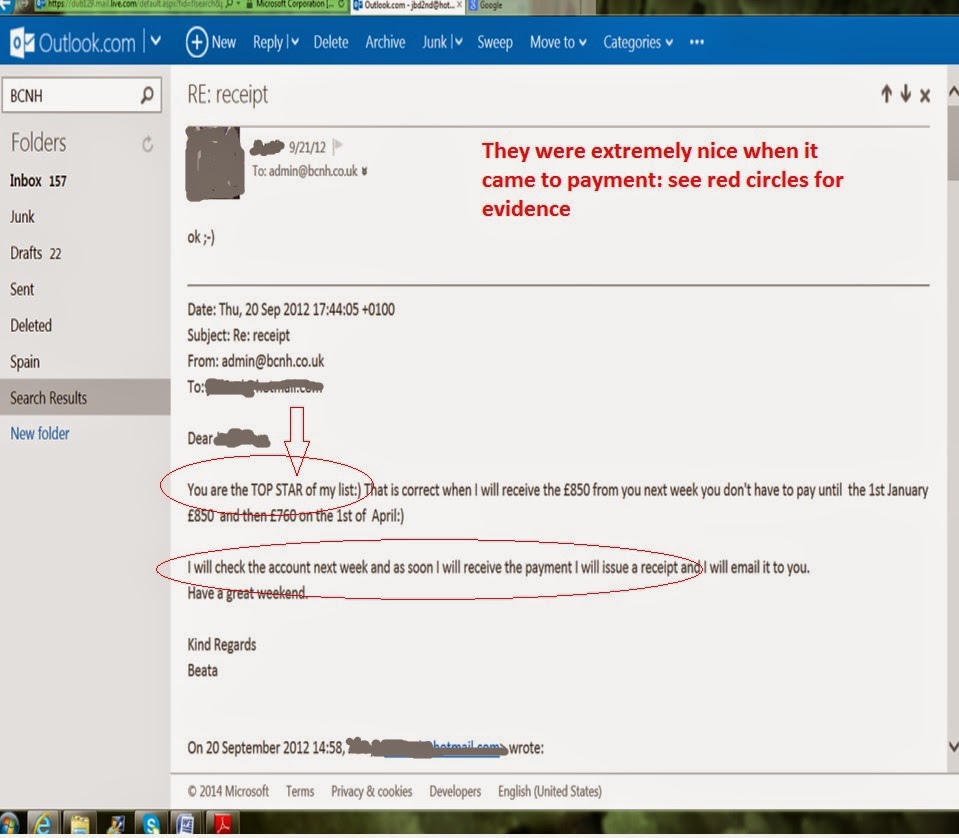 Attached is a copy of  the learning of agreement copy signed by the principal to prove you that I was a real student at BCNH. 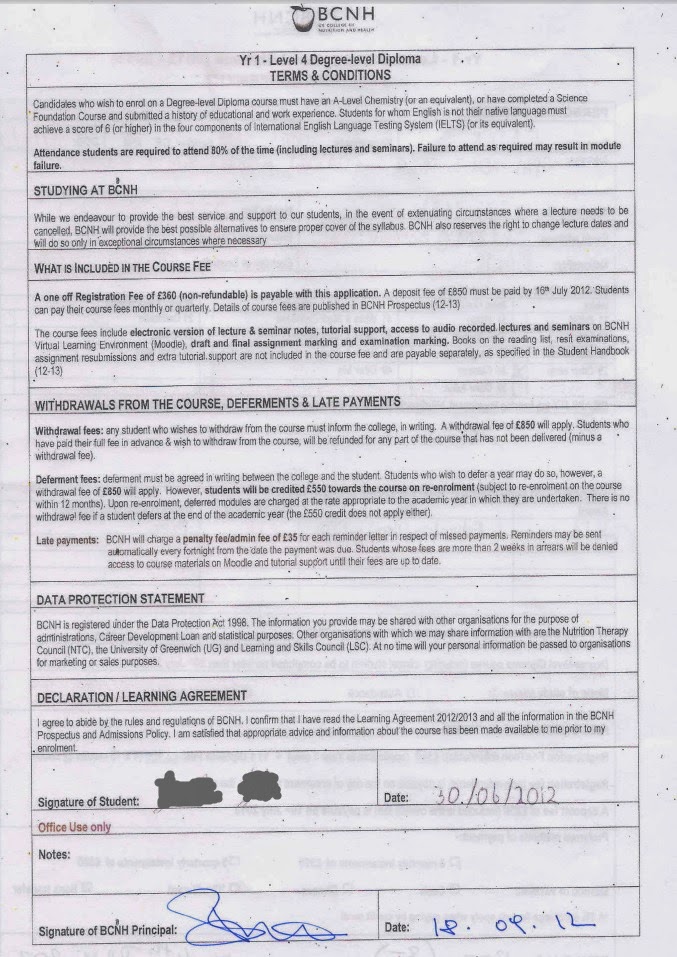 Posted by Past BCNH Student at 17:32 No comments: